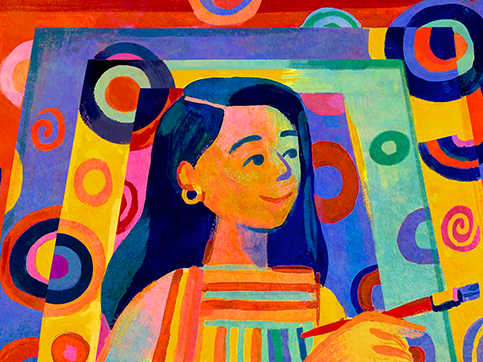 Google is celebrating a momentous day in the history of the Philippines, with a Doodle of artist and activist Pacita Abad.

On this day (31 July) in 1984, Abad made history as the first woman to receive the country’s prestigious Ten Outstanding Young Men art award.

To mark the anniversary of the occasion, Google created a colourful piece of art representing the renowned feminist artist, who was lauded for her bright and colourful style.

Born in 1946 in Batanes, Abad studied in San Francisco in 1970 before travelling from Bangladesh to Sudan with her art supplies, where she found influence for what would become her signature style.

Her work tended to be abstract – she created a technique that she called trapunto, from the Italian word for “quilt”, which involved stuffing canvases to create a sculptural effect.

She was also known for integrating culturally significant materials discovered during her travels, such as shells and fabrics, into her projects and she used pieces like her 1979 series Portraits of Cambodia to raise awareness of societal issues.

Abad’s acceptance of the Ten Outstanding Young Men award in 1984 prompted uproar in the Philippines art community, with a number of newspapers publishing letters from male artists who believed they deserved the top prize.

Abad ignored them and wore the award as a badge of honour, telling onlookers that “it was long overdue that Filipina women were recognised, as the Philippines was full of outstanding women”.

Just a few months before her death of lung cancer in 2004, one of Abad’s largest public displays, the 2003 project Painted Bridge, was created. She covered Singapore’s 55-metre long Alkaff Bridge with 2,350 vibrantly coloured circles.

Throughout her 30-year art career, Abad had 75 solo shows. Her work was exhibited in over 200 museums and galleries across the world.