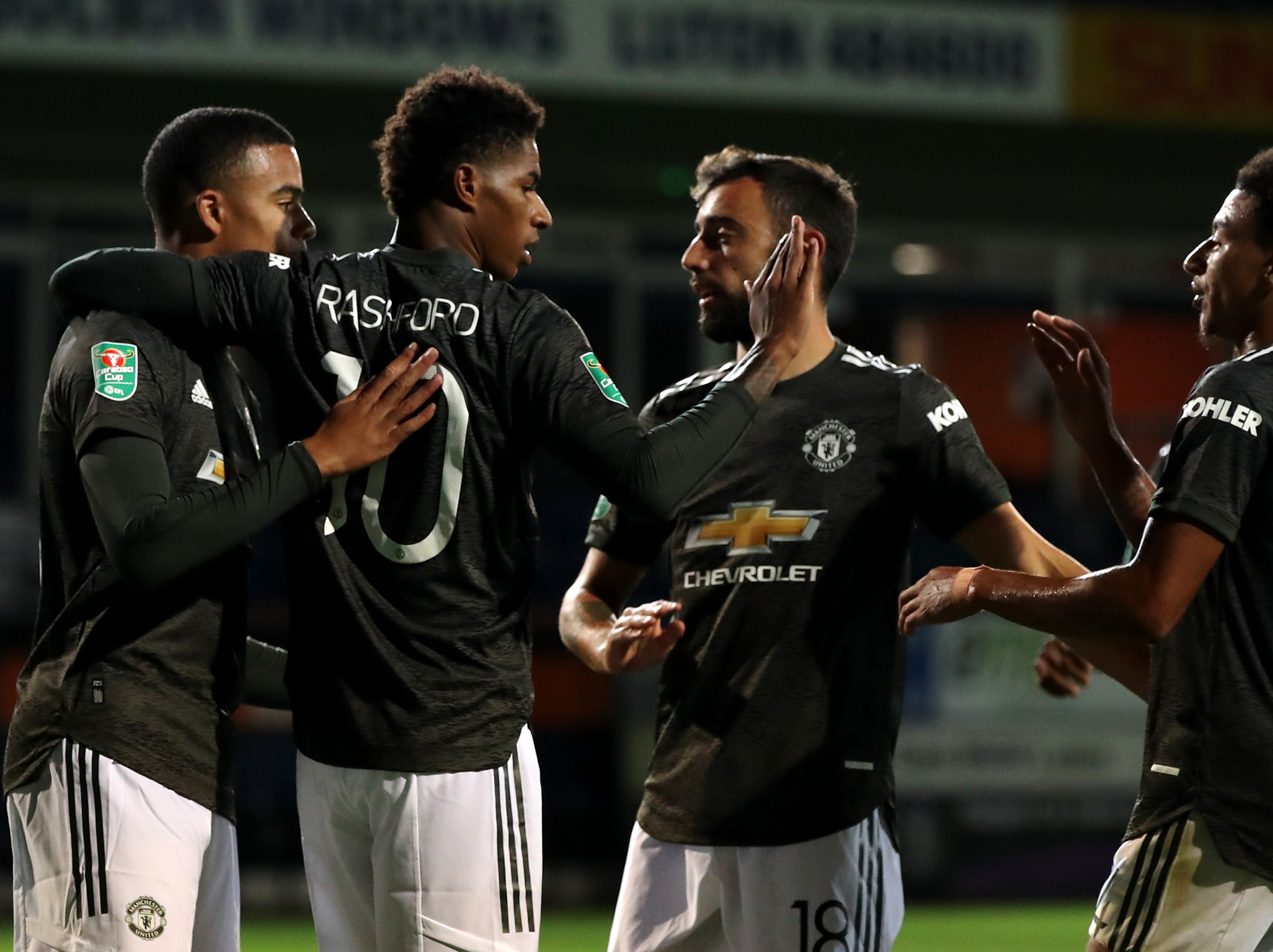 Manchester United arrived at Kenilworth Road with three objectives for the evening: to respond well to Saturday’s dismal home to Crystal Palace, to build up much-needed match fitness after their lack of pre-season preparations, and to reach the EFL Cup fourth round. They would just about pass on all three counts.

Marcus Rashford and Mason Greenwood’s late goals off the substitutes’ bench were required in order for Ole Gunnar Solskjaer’s side to firm up a lead established by Juan Mata’s first-half penalty and overcome a brave but ultimately beaten Luton Town. A trip to either Preston North End or Brighton and Hove Albion now awaits next week.

United were not at their best, though not at their worst either. Solskjaer believes it may take three or four games before they are fully up to speed following their truncated summer break and it showed at times, but he will be encouraged by how his players eventually asserted themselves on this contest against a Championship side  who have started the season strongly.

Nathan Jones’ men edged the opening stages but only truly managed to scare United late on when the score was still at 1-0. Dean Henderson was making his full debut in the United goal, nine years after joining the club’s academy, used the first save of his first-team career to deny Tom Lockyer’s far-post header and prevent a likely penalty shoot-out.

Luton, riding high in the second tier after last season’s unlikely escape from relegation, may have been the underdogs for this third round tie but still made nine changes. Nathan Jones has the club’s first derby Beds–Herts Derby in 14 years to prepare for, with a short trip down the M1 to relegated Vicarage Road set for Saturday lunchtime.

As for United, only captain Harry Maguire survived from the weekend’s dismal defeat to Crystal Palace while Henderson and Donny van de Beek were handed full debuts.  Solskjaer spoke of how he wanted to see his players be “quicker on the ball, quicker to get to the ball” than against Palace, but if anything they were initially just as ponderous.

Perhaps that should not come as a surprise. It is still just a touch over five weeks since United’s 2019-20 campaign ended in Cologne with precious little time to build match sharpness in between. There was a distinctly pre-season feel about the first half, with constructive attacking play only seen in fleeting moments.

If anything, Luton posed the greater threat. Danny Hylton should have squared to one of several waiting team-mates instead of ending a flowing counter-attack with a shot into the side netting. Andrew Shinnie went close, seeing a shot blocked at close range after United’s defence had failed to cope with an inswinging corner.

Yet on the cusp of half time, United won their first penalty of the new campaign after earning 22 in all competitions last term.

Along with Mata, Van de Beek was one of United’s brighter sparks and caused the panic within Luton’s penalty area which led to Lockyer botched clearance bouncing off Shinnie and towards Brandon Williams. George Moncur rushed to win the ball back and clumsily felled the United full-back, leaving Mata to convert from the spot.

From thereon, there was little doubt that United would progress and Solskjaer’s side found greater rhythm, with both Jesse Lingard and Nemanja Matic going close. Lockyer may have made the pair pay for those missed opportunities with his header but Henderson was on hand to deny him. Lockyer tried again on the rebound, only for Eric Bailly to block on the goal-line.

And any chance of a lifeline for Luton was snuffed out by the late brace. Rashford, Greenwood and Bruno Fernandes had all been introduced with 11 minutes remaining in a triple substitution that could be politely described as ‘overkill’. The three combined for United’s second, finished expertly by Rashford, and Greenwood later cut inside from the left to administer a stoppage-time coup de grace.