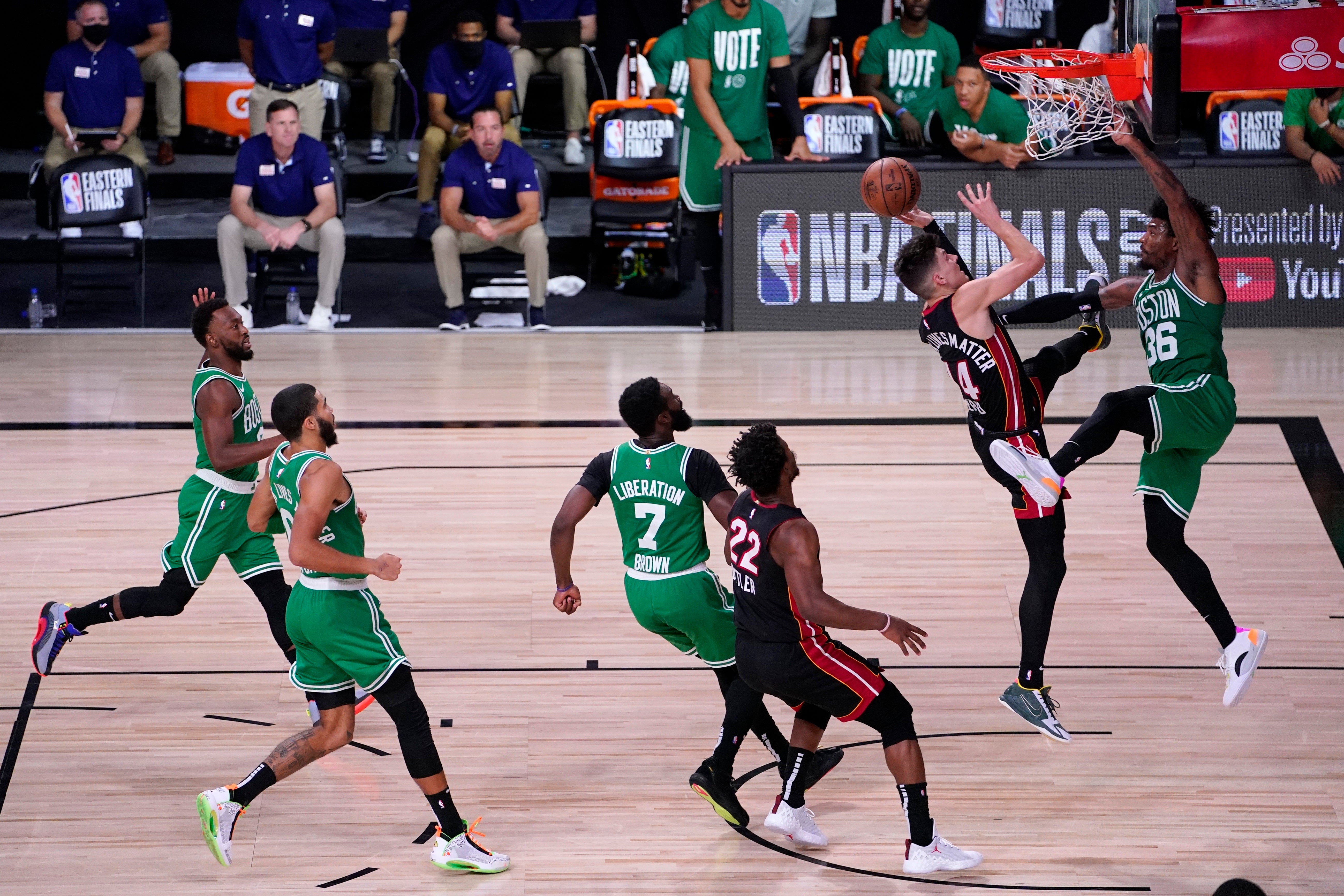 The youngest player on the floor helped the Miami Heat move a game away from the NBA Finals.

Goran Dragic added 22 and Bam Adebayo had 20 points and 12 rebounds to help the Heat take a 3-1 lead in the best-of-seven series. They can close it out Friday night in Game 5.

Jayson Tatum scored all 28 of his points in the second half for the Celtics. They erased a double-digit deficit to take a one-point lead in the fourth — then saw the Heat run away again. Jaylen Brown scored 21 points, Kemba Walker added 20, Gordon Hayward had 14 and Marcus Smart finished with 10 points and 11 assists.

Brown’s 3-pointer with 16 seconds left cut Miami’s lead to 107-104. Herro went to the line 2.1 seconds later and coolly swished a pair, stretching the lead back to five. The Celtics got within two points twice, Butler made a free throw with 1.1 seconds remaining, and Boston — out of timeouts — never got a desperation shot off.

Herro made 14 of 21 shots from the floor, 5 for 10 from 3-point range and became just the second 20-year-old in NBA playoff history to score at least 37 points in a game. The other: Magic Johnson, who had 42 in Game 6 of the 1980 NBA Finals for the Los Angeles Lakers.

And the Heat rookie playoff record was 27 by Dwyane Wade in 2004; it now belongs to Herro, who scored 17 points in the fourth alone.

He had five straight points in the fourth to help push what was a one-point lead back out to 91-85, his 3-pointer with 4:09 left made it 98-90 and he struck again with 56 seconds left when he took a pass from Butler for a layup and a nine-point edge.

Tatum missed his first seven shots before getting a 3-pointer to fall midway through the third and cutting Miami’s lead to 60-53.

The Heat could have been up by much more at that point. Butler had a basket waved off about a minute earlier because he committed an offensive foul, and on the next Miami possession the Heat missed four shots — three from 3-point range, then another try at the rim.

It was part of what was a 3-for-17 slump by the Heat, going back to the second quarter.

And yet, they still led, because Boston’s offense wasn’t much better. The Celtics shot exactly 8-for-20 in each of the first two quarters and that, combined with 11 turnovers, helped the Heat go into the break with a 50-44 lead.

But Tatum’s first basket started what became a 6-for-7 finish to the third quarter for him, he had 16 of Boston’s 32 points in that period and the Celtics were within 77-76 going into the fourth.

Celtics: Tatum’s 0-for-6 first half tied for the second-worst opening-half shooting of his career. He was 0 for 8 to begin against Dallas on Nov. 11, and 0 for 6 against Milwaukee in the first two quarters of a playoff game on April 17, 2018. … It was announced before the game that Gordon Hayward and wife Robyn are parents for a fourth time; Gordon Theodore Hayward is their first son.

Heat: Dragic made a 3-pointer with 8:51 left in the third quarter for a 58-46 lead — Miami’s first double-digit lead of the series. The biggest Heat lead in the first three games had been eight points. … Solomon Hill got first-quarter minutes for the first time in these playoffs.

Nobody knows when next season will start, but the Celtics are anticipating that guard Romeo Langford may not be ready when it does. Langford had surgery this week to repair a ligament issue in his wrist. “It will probably bleed into next season, whenever that starts,” Celtics coach Brad Stevens said.

This is the 12th time Miami has taken a 3-1 lead in a best-of-seven series. The Heat won each of the previous 11.