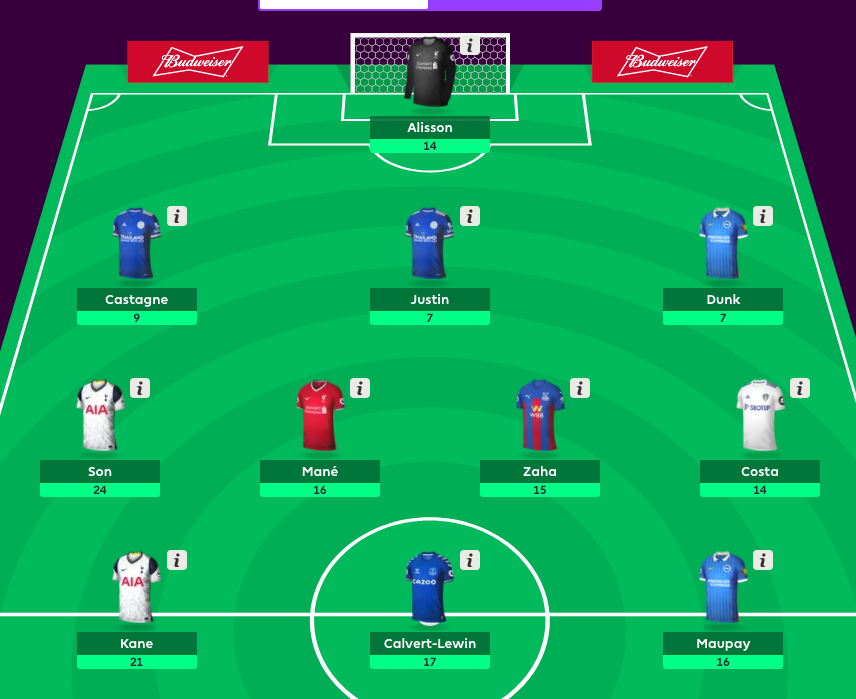 It was an extraordinary Premier League weekend with 39 goals scored across eight games, with Chelsea’s highly anticipated meeting with Liverpool ultimately the most underwhelming of the lot.

Everton smashed five against West Brom and Spurs did the same to Southampton, Leicester and Leeds both hit four, while Brighton and Crystal Palace scored three times as they picked up three valuable points on the road.

It was a wild and unpredictable time for Fantasy Premier League managers, around half a million of whom sold four-goal Son Heung-min in the run-up to gameweek 2.

Here is the team of the weekend:

Another big haul from the new signing, who grabbed two assists to add to his first-week goal. One to watch.

Leicester’s other full-back was in on the act too, scoring his first goal as the Foxes thrashed Burnley.

On a weekend which didn’t feature many standout defensive displays, the Brighton captain’s clean sheet and bonus point earns him a place in team of the week.

Son racked up four goals in an astonishing display of finishing at St Mary’s, delivering what could be the highest single-game score of the entire season.

After Mohamed Salah’s hat-trick last week of course it was Mane’s turn this time out, and he duly delivered with two goals and a man-of-the-match display.

The forward, who is categorised as a midfielder in FPL, was electric on the break and helped himself to two goals against a lacklustre Manchester United.

The winger scored twice as Leeds slammed four past Fulham.

Has an FPL player ever ranked up four assists and a goal in a single game? A stunning performance by the England captain at Southampton.

A fast start to the season by Calvert-Lewin, who already has four goals to his name after grabbing a hat-trick against West Brom.