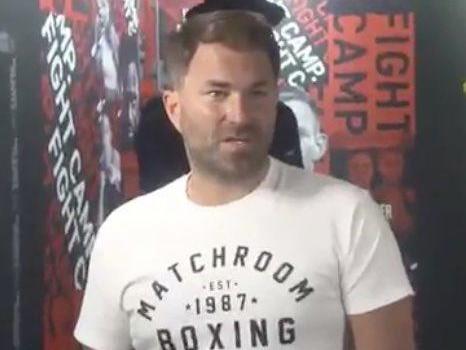 Eddie Hearn was left with egg on his face when the Matchroom Boxing promoter swore live on Sky Sports News, unaware that he was on air and being broadcast around the world.

The boxing promoter was appearing ahead of the weigh-in for the first of his ‘Fight Camp’ events this weekend, where Sam Eggington will take on Ted Cheeseman in the first of four behind-closed-doors cards to be staged in the garden of his Essex headquarters.

Hearn has been prominent on Sky throughout the week in order to generate interest for Matchroom’s return, which comes after Hearn had a purpose-built arena built in the grounds of the Matchroom Boxing head office in Brentwood.

The four fight nights on consecutive Saturday’s through August will culminate in the heavyweight showdown between Dillian Whyte and Alexander Povetkin on 22 August as the sport continues its return from the coronavirus-enforced hiatus.

With his fights back up and running, it’s no surprise to see Hearn with a spring in his step and a smile on his face, but that jubilant feeling disappeared rather quickly when he let loose the faux pas live on air on Friday afternoon.

Unaware his interview with Sky Sports News was being broadcast live, Hearn cut off the reporter mid-question with a Michael Jackson impression made famous on Bo Selecta, blurting out “Shamone Mother*******!”

With the reporter holding his head in his hands, Hearn quickly asks “it’s not live, is it?”, before being informed of the news he did not want to hear and resulting in a swift apology.

Hearn was able to laugh off the gaff though, posting on a video of the incident that appeared on Twitter: “That was awkward..when you think it’s a rehearsal…”

Hearn will put on the first of his four Fight Camp events between Eggington and Cheeseman from 7pm on Saturday evening, with four other bouts supporting the IBF International super-welterweight title clash.