PNY’s CS900 1TB SSD has been touted as the best budget model in its class, and you can get one for $89.99 shipped, today only, originally $104.99. Once installed in either a desktop or laptop (Mac / PC), you’ll be able to do more in less time with speeds of up to 550MB/s read and 515MB/s write. Whether it be booting up, powering down, or just loading applications, this SSD dramatically cuts down the time required for the task. Product page. Read more for a hands-on video review and additional information. 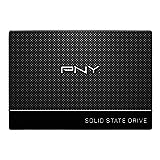 Since there are no moving parts and thanks to its non-volatile NAND, the CS900 is 30-times more robust as well as being less prone to failure than traditional hard drives (HDD). It can withstand extreme environments, and will not lose data even when dropped.