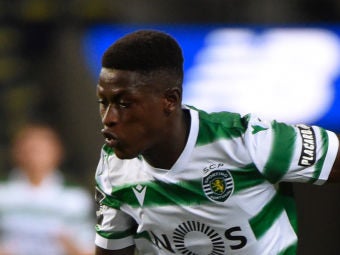 Mikel Arteta is looking to bolster his Arsenal squad in the remaining weeks of the season, with midfield his priority as French international and Lyon star Houssem Aouar and Atletico Madrid midfielder Thomas Partey remain the ideal options.

There is also great intrigue as to who exits the club, with Alexandre Lacazette, Lucas Torreira, Ainsley Maitland-Niles, Hector Bellerin and more linked with moves away.  Here are the latest transfer rumours, done deals and more surrounding the Emirates.

Arsenal are battling it out with Liverpool for Sporting wonderkid Nuno Mendes.

A Bola claim both sides will have to pay the €45million release clause.

The 18-year-old has flashed already at left-back for the Portuguese giants.

Brentford have rejected a £10m bid from Arsenal for goalkeeper David Raya, according to The Telegraph.

The Gunners are already closing in on signing Iceland international Runar Alex Runarsson from French side Dijon for £1.5m.

Now The Telegraph states that Arsenal have seen an approach for Raya rejected by the Championship outfit.

The newspaper believes that Brentford would only be willing to sell if they were able to take Raya on loan for this season.

ARSENAL AMONG SUITORS FOR MENDES

Arsenal are among the interested parties in 18-year-old Sporting CP left-back Nuno Mendes, according to a report in Portugal.

A Bola state that Mendes, who only made his debut in June, has attracted suitors across Europe.

The Portuguese daily states that the Italian duo Juventus and Milan are thought to be interested in Mendes, as are Liverpool and Arsenal.

However any deal for the youngster wouldn’t take place this year, but next.

Mendes has a €41m release clause in his contract.

Talks continue between Arsenal and Serie A side Torino over midfielder Lucas Torreira, but it’s been reported that the Italian side are complicating the negotiations.

Torreira has been told by Arsenal boss Mikel Arteta that he has little future at the Emirates this season, and the player has been constantly linked with a move back to Italy.

Torino look like the most serious suitor for his services, but The Daily Star reports that the Granata are looking to insert a myriad of clauses into the deal.

It’s reported that Torino would take the Uruguayan on loan initially, and would only keep Torreira on a permanent basis if a string of objectives are met.

These reportedly include qualifying for the Europa League, registering a specific number of appearances, goals and assists, and receiving a certain amount of international call-ups.

Arsenal are demanding £22m for the 24-year-old.

Kolasinac has played over 100 games for The Gunners since joining from Schalke in the summer of 2017, but has fallen down the pecking order under Mikel Arteta.

Sky Sports now believes that Leverkusen are keen to bring the 27-year-old back to the Bundesliga.

They also remark that Kolasinac would like to return to Germany for family reasons.

Arsenal legend David Seaman believes his old side can finish in the top four of the Premier League this season.

Seaman was interviewed by Talksport, and states that Mikel Arteta’s side can break into the top four this season.

“The end of last season was good. The start of this season has been great,” he said. “I think realistically we are looking at top four.

“I think that will be a great season. We still need a couple of players. We are still looking for a strong holding midfield player. That Patrick Vieira or Yaya Toure type.”

Arsenal last finished in the top four in the 2015-16 season, when they finished second.

Barcelona made a concerted effort to prize Arsenal striker Pierre-Emerick Aubameyang away from the club before signing a new contract extension, according to a report.

Sky Sports states that the La Liga giants made an approach for the 31-year-old striker during this transfer window.

However, Aubameyang was convinced to stay in north London by boss Mikel Arteta, and signed a three-year extension to his contract this week.

The striker scored 22 goals last season for The Gunners.

Runar Alex Runarsson is set to undergo his medical with Arsenal today ahead of his £1.5m move from French outfit Dijon, according to a report.

The Telegraph states that a deal has been agreed between the two sides, and the goalkeeper looks set to join The Gunners.

Runarsson is seen as a replacement for Emiliano Martinez, who joined Aston Villa this week for £20m.

Arsenal have reportedly tabled an offer for Lyon star Houssem Aouar, according to a report in France.

Aouar emerged as one of the stars of Lyon’s run to the Champions League semi final last season, and the 22-year-old has attracted a lot of attention across Europe.

The Gunners have seemingly jumped to the front of the queue to sign the midfielder, and French outlet Telefoot Chaine state that Arsenal have made a move to bring Aouar to England.

A bid of £36.5m has been tabled according to the report.

Juventus and Manchester City had been linked with Aouar in the summer, but it seems Arsenal are now the clear favourites to sign the player.